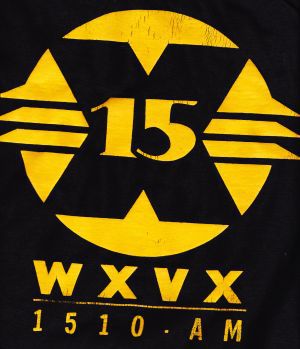 Updates thanks to contributor Chris Cuomo.

When one looks up ‘1510 Pittsburgh’ or something similar, WPGR-AM shows up, as a small signal member station of St. Josephs Mission and broadcasts Catholic programs 24-7. For whomever can hear the station’s 1000 watts.. or who tries at night, as the station transmits a whopping ONE watt! Well, okay, at least it’s still on the air.

Our Contributor writes that, indeed, the current station is lucky to be around,

The attached apartment building (which was occupied at the time I was at the station) supposedly burned down around 2000. I’m going back home to Pennsylvania this month. If I get around to it – and if it’s safe – I’ll try to get some current photos.

X-15 was considered to be, by some, an experiment. An experiment to see if Rock music could survive on AM. Launched in 1989 after the demise of WXVY (FM) and its Alternative Rock format, WXVX took up the banner for early Alternative and played a wide variety music, including breaking artists such as Nirvana and Pearl Jam. As you’ll hear on this recording, the jocks were anything but polished and the station’s promos and imaging left much to be desired by today’s standards. And according to Chad Stevens, who checked in immediately after this posted, the whole thing is true – that the air staff of this Alternative station was, indeed totally comprised of amateurs! Listeners loved it. Advertisers, apparently, hated it.