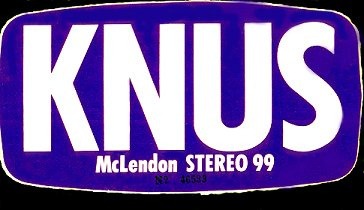 KNUS 99 – 98.7 to be exact, was McLendon’s FM powerhouse. Originally slated to be an all-news station, and almost never to be because Gordon McLendon almost sold it in the 60s, KNUS turned out to be the SECOND successful Top 40 station, right behind (and later surpassing) sister KLIF 1190.

Here’s two great jocks doing Top 40 in a style imitated by much of the RKO chain (NOT the other way around) throughout the 70s. It’s GREAT radio – no reverb, plenty of personality and some big contests for the time period.