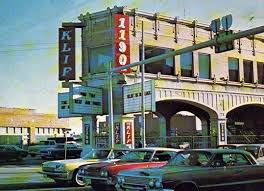 Contributor Steven Green sent this in quite a while ago but for lack of a better copy, we’ll include this for historical purposes.

This is difficult to listen to, only because the source recording is too loud and it caused clipping and distortion, especially very low frequencies. I tried to clean this up by reducing the bottom end of frequency response, but it’s still going to be tough in some spots. It IS listenable if you can put up with the clipping.. and for good reason. This aircheck, being so old as to likely be one of the very earliest recordings from the top 40 era. Perhaps, ‘TOP 40’ is a bad term for 1956. There really was no such thing at that point in the evolution of independent radio stations, as network programming had only relatively recently nearly all gone to television. But all the elements are there, even if the music is not. Time and temperature, a friendly, informative morning host, comprehensive news and a weather report. Isn’t that the formula that made Top 40 radio the greatest format in history?

Let’s walk you through this telescoped aircheck.

This starts at 7:00 AM. We enter the recording with an old… VERY old KLIF jingle. We have no idea who recorded this or from what studio. This goes into a really GRAND Top of the Hour Legal ID. Then, into KLIF News. Now, this was done in a very different manner than news was done some ten years later. Each story starts with the city of the location of each story. Then it’s delivered in rapid, staccato style. You will be very interested in listening to the news of this day, Monday, July 23rd, 1956!


This is a two-part aircheck with each segment running about 45 minutes, leading us to believe that this was a cassette dub from an original reel. We sure wish we had the original reel to master from. Perhaps that will show up in our mailbox one day after the right person views this classic aircheck.

After the news… a quick message which says,

“The neediest people today are the refugees…“

Perhaps that should serve as our message for these, our troubled times.

We’ll leave it up to you to listen to the rest of this very old aircheck.