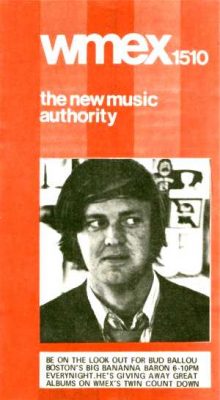 Bud Ballou would become legendary in Boston, at 1510 WMEX, then Fairbanks Communication’s WVBF in suburban Framingham. But before his stint at 105.7, Ballou was heard all up and down the Eastern Seaboard on >WKBW AM 1520 Buffalo. KB itself is legendary, with a signal that blankets the eastern half of the United States and Canada, from the Maritimes to Florida, WKBW, and its present-day relative WWKB, on 1520, easily has the strongest signal on the AM dial. It was a station known for launching the careers of many artists just by virtue of their records being heard on KB.

Ballou has always been… himself. He was one of those jocks who had his own way about him on the air. Like many jocks of that era, Ballou made a name for himself with his audience, one that listeners remember to this day. There was nothing generic about Bud Ballou. Sadly, Ballou passed away in 1977 at the young age of 34.

So, here’s a really young 24 year old Bud Ballou on KB Radio. KB sounded much different in ’67 than it did just a couple of years later in the 70s, so listen and enjoy a very rare aircheck indeed!