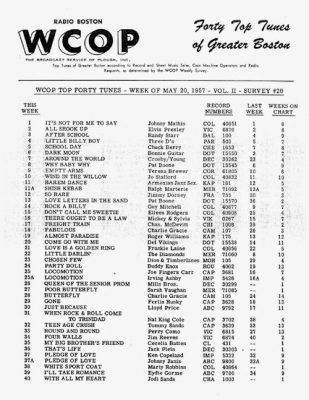 …Bud Kelly with all the tunes that catch the public fancy…

One has to wonder what this station was thinking in 1961. There’s more Middle of the Road music here than anything resembling a youth oriented radio station. However, this was Boston and things were a bit, shall we say, stiff… Brenda Lee has the number one song in Boston this week (a clue for historical purists), and one would think that after hearing that, you might hear a Rock and Roll song, but instead it goes the other way… Jerry Vale? Really?

Ok. Bud Kelly does a really good job keeping all the elements in place, and obviously didn’t have much to work with. There is, ONE, WCOP jingle, about two thirds of the way through this scope of some really ancient radio in Beantown.