When Bob Gilmore gave this to me about two weeks ago, he said, “Yea! WEBE 108 was GREAT back then”. That was a reply to my question about what WEBE 108 sounded like. Now, granted, the overnight slot isn’t really representative of a full broadcast day on this station, but you get a good idea what it sounded like.

The station processing was very hot! Sounds like they used an old Compeller for maximum compression. So much so, that whether Charlie Farr was playing music from tape (most likely cart) or 45 rpm singles, you can hear either the tape hiss or the needle on the record. As to the latter, I love that sound as it brings back some wonderful memories of being on an FM station playing records.

The jock is certainly capable, however, this is the overnight shift and it sounds like this is liner card radio. Yet the imaging for this station in 1984 was quite good. No jingles. Those would come later. But the station format is typical Top 40. I don’t at this point know if the station was Top 40 or AC in the beginning. All I can glean from this is the station’s music rotation was contemporary (with seemingly MOST of the hit records at that point in time), yet very upbeat and gold-based. For you non-radio people, that means they threw a lot of oldies into the music mix.

Before WEBE, there was a very broad-based, Album Rock format under the call letters WDJF. I don’t have any airchecks of the station during that era. Today, WEBE 108 still doesn’t mention its exact frequency, despite the fact that most stations do… but its probably not necessary since the station is known for being at the top of the radio dial and it’s been branded WEBE 108 since signing on. Today’s WEBE 108 is a Hot Adult Contemporary (Hot AC) station playing mostly upbeat current pop music with very little Rock. 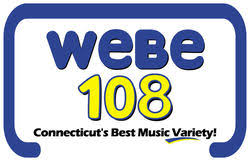 WEBE 108 has an interesting antenna which is attached to a smokestack from a factory sitting on the Long Island Shoreline (below). You can clearly see it from I-95 on your left as you head southbound. If you’re fascinated by antenna systems, you really should visit fybush.com. Scott Fybush takes photos of radio stations, their studios, transmitters and antennas for a living. Along with daily podcasts, NPR News and such. Visit our partner site, fybush.com today!