Going back several years ago when Andy Bologovsky sent in a bunch of WAVZ CDs for us, here’s a recording that’s a bit confusing. Its labelled August 1974, and for some of the promos heard in this, it is likely from that date. However, we hear Ron Foster in the middle of the Top 100 countdown of 1969. No idea where that came from but we’ll include it here since it apparently was intended to be a part of this presentation.

This is labelled “Tape 46”, apparently of our Contributor’s own collection. Originally sent in a couple of Summers ago, we return to our vast archives and add this gem to the growing collection of wonderful radio sounds of the past. Enjoy it, John Long’s WAVZ kicked serious ass in a world where AM was king and there was no internet, or personal computers, for that matter! 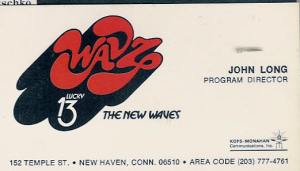