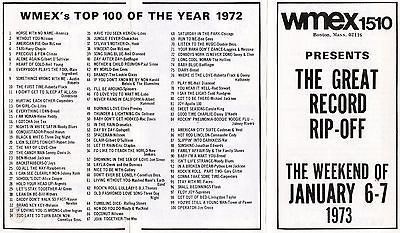 Despite a signal which radiated mostly out over the Atlantic Ocean, the format and 50,000 watts of hit music power is memorable to many from the classic era of Top 40 radio! Sent in by Contributor Russ Oasis, this was during an era where WMEX flirted with an Album Rock format, peppered with hit songs. One could compare this approach with Richard Fairbanks’ 105.7 WVBF Framingham – “The Electronic Mama”. In my humble opinion, WVBF did it better.

To listen, click the BIG BLUE BUTTON further down the page.

BEFORE WE CONTINUE…
It costs money to build a museum. Fees here, fees there. This month is no exception. Won’t you please contribute a bit to help us with our archival efforts? Every bit counts!
Thank you!

The real competition here was with crosstown 68 WRKO. Signal wise, WMEX didn’t have a chance. But they gave it their best shot and that’s what WMEX is remembered fondly for… a format that still sounds great, hearing again all these years later!

This was recorded in 1972. I was using the name Rick Williams. We battled WRKO and during this regime, we never beat them, John Garabedian, before us had beaten them briefly and as soon as he exited, this regime came in. As you can hear, the station is a bit old fashioned compared to the clean and tight sound of WRKO (although this period on 1972 was not one of their best, either). I was constantly trying to tell the management of WMEX that our presentation was square and that we needed to tighten up (as well as get rid of the talk show in the overnight slot). Eventually, they got sick of hearing it from me and it was time for me to move on. Both this and the WRKO composite were recorded at the same time. Compare them to see what I mean.

Heard in this composite, in order:

We’re not sure about the origins of the jingles, but somebody knows. Heller, perhaps?

This aircheck was scoped and processed at the source by contributor Russ Oasis. He did a very good job of bringing WMEX back to life. Be sure to thank him in your comments!