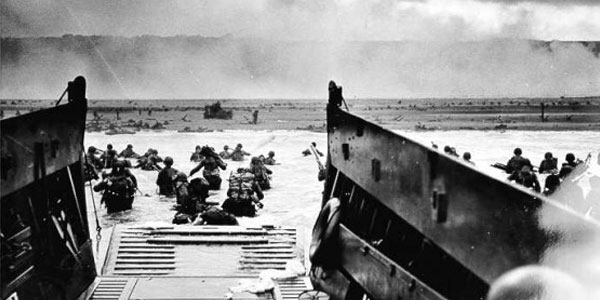 In all of world history, there was never a human conflict that caused so much death and destruction. While the actual fighting took place in Europe and in the Pacific, the war was felt all over the world. Unlike other wars, World War 2 was the first to be fully covered by radio. Radio, the first mass media which delivered the news almost as events took place, had a front-row seat at the battlefields of France. The reporters were there, microphones in hand in London, as the Battle of Britain was fought by pilots flying Spitfires and Messerschmitts and Junkers. Radio was on the front lines when the Allies crossed the Rhine and invaded the heart of Nazi Germany.

This recording, provided under the fair use agreement via Archive.org, documents the first broadcast by the Columbia Broadcasting System (CBS). The broadcast begins on June 6, 1944, at about 3 AM, Eastern “War” Time. Listen for the names of legendary broadcasters, important military and government officials, and coverage of the largest amphibious assault in history. Notice the informal nature of this broadcast, which resembles, in many ways, modern-day Cable News coverage, with its conversational style. Clearly, the network was very well prepared, but because of the fact that there was no pre-packaged programming, no stagers, music beds, sounders, or any of the production elements which listeners hear on TV and Radio, the reporters and anchors ad-lib and re-read all the information they received up to that point. This is not only an historic broadcast because of its importance in World History, it is also some of the most professional and factually correct broadcasting ever heard.

The announcer/news anchor heard is Bob Trout. There is a report from Edward R. Murrow in London, and CBS even had it’s own “Military Analyst”, Major George Fielding Elliot, who tries to interpret the reports that come in during the night. Trout takes listeners on an informal tour of the CBS network newsroom, with vivid descriptions of the teletype machines printing out the news stories being gathered from all over the world. Later in the broadcast, listen for a live report via shortwave hookup from London by Edward R. Murrow.

There are plenty of documentaries on the history of World War II. This is different. Beginning around 2 am Eastern Time, June 6, 1944, listeners to stations of the CBS Radio Network heard this coverage as the details of the allied invasion of German-controlled France began to come in. It’s part 1 of a 4 part recording that takes listeners through the first several hours of the news of the Allied Invasion. This is real world history, heard as it happened.

The archived, master copy of this recording was originally made on thick, acetate disks. Much like a 33 1/3 rpm record, these were recorded and played using a stylus. However, the setup was much different than conventional records of the day. In 1944, most records were recorded at 78 rpm. And all records start at the outside edge of the disk. These acetate masters, recorded mainly by only the largest radio stations and networks, start at the inner part of the recording and play backward, with the end of the recording on the outside of the disk. The recording speed was slightly slower than 33 1/3 rpm, and thus, these recordings had to be later transferred to large reels of tape using the transcription machines that etched the recordings onto the acetate and then played them back. Since there are very few transcription machines left in existence, these recordings are rare indeed.

The quality is so-so. While there is a little white noise, indicative of this recording having come from a reel of tape, overall, the fidelity improves with time. From about the 20-minute mark in this ‘aircheck’, the recording sounds pretty decent. I did just a bit of light processing to bring the volume levels up to even, and mastered to -6 peak db. I also removed the ‘seam’ where one recording ended and the other began. It appears that either the acetate masters or the reel copies only ran for about 20 minutes each. Fortunately, the start and stops in the tape overlapped so that the listener doesn’t miss anything.

Click below to hear this unscoped master audio-only recording.