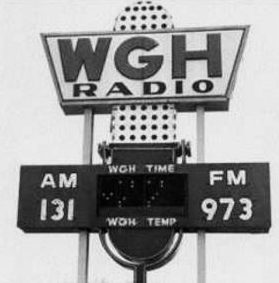 …Number one. With more listeners each week than any other station, AM or FM!

It’s been said that the call letters WGH stood for “World’s Greatest Harbor”. Perhaps, in the early days of broadcasting. And it’s true in the sense that Hampton Roads, in general, has perhaps the best harbor in the U.S., with a quarter of the U.S. Navy stationed there. But, in the world of radio, WGH holds a special place in the greater Norfolk area. It really WAS Hampton Roads’ first Top 40 radio station (a slogan that WGH-FM would later use in 1987-89).

As evidenced here in this 13-minute scope, WGH, in true Top 40 fashion played it all. Rock, Disco, slow ballads… you name it! Unfortunately, this tape suffers from a case of ‘boredom’. What I mean by that is, if there was ever a case for playing the music and telling the jocks to back off the mic, this is it. Five things which programmers and consultants have to ping on during talent’s aircheck sessions are (and, IN ORDER, here!): Call letters, Time, Temperature… then saying the jock’s name, and what the name of the song is now playing! EVERY BREAK!! Hey, at least it wasn’t a back sell every break!

Kudos to the WGH production department. The stop sets really are quite interesting, and the commercials (whether they be promos or just a regular spot) show creativity and lots of thought put into selling the product without thunderous sound effects getting in the listener’s face. Station’s audio processing, however, is quite lacking. Even though this was recorded on less than perfect quality tape, it’s quite obvious the lack of decent EQ. The studio microphone is especially lacking. Thinking back to 1977, however, some people liked it ‘flat’. I’m not one of them.