Here’s an interesting aircheck of a radio station which did much to promote itself, not only as an Oldies station playing music from the 1950s, but as a daytime only AM station that was on the verge of getting its nighttime authority and going 24 hours.

Denny St. John is your host for this 21 minute scope that starts off with a PAMS cut (from 1966, I believe but can’t remember which package – you purists will know), Oldies (this is scoped, remember?) and then a LOT of the personality of Mr. St. John. Our jock in charge spends a great deal of time promoting the fact that KOFY, which is somewhat conflicted as to how to identify itself, is about to go fulltime due to new FCC regulations. This is a fascinating explanation of the then-new treaty between the U.S. and Mexico regarding clear channel AM frequencies. You should really listen for this which comes around the 10 minute mark.

Not knowing much about KOFY (KCTC, which is today, a simulcast of Sports KNBR), we’ll leave much of the descriptions to site visitors. 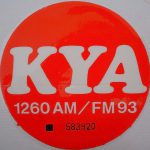