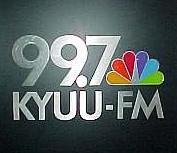 KYUU was launched with those call letters by then owner NBC, in 1978. The station was Top 40 for most of its existence, but in 1988, NBC began selling off all of it’s radio properties to concentrate solely on Television. Emmis purchased KYUU, much like it purchased the 660 frequency from NBC in New York City. A hotter CHR format ensued, along with a new name – X-100. Emmis Changed the call letters to KXXX to match. After a number of different owners, the station was finally sold to Infinity Broadcasting (today’s CBS Radio), who in turn, flipped the station to Oldies, to match their other acquisition, 610 KFRC. 99.7 thus became KFRC-FM. KFRC-FM now resides at 106.1 and 99.7 is now KMVQ “99.7 Now!”. This is a condensed story, the long version would take up several pages!

With the legacy now in print, lets introduce this aircheck. It starts with “Bleu in the Morning”, (The True) Don Bleu having done wakeups at KYUU for many years and was very familiar to the market. Notice lots of mentions of KYUU broadcasting live from Great America amusement park the next day. About halfway through this aircheck, Rick Shaw (610 KFRC) begins his show with a 45 minute music sweep.

There are a LOT of dead segues on the unscoped version of this aircheck, in fact, there’s so much music that I had to scope three whole hours down to about 35 minutes. Unlike a recent KFRC aircheck that ran almost 3 hours and scoped still runs over an hour. And, while he’s not heard on this aircheck, Bobby Ocean (KHJ, KFRC) voices a great promo – just listen for it, runs a couple of times!
This is a high quality aircheck, donated by Big Apple Airchecks, who got it in a trade with someone else. The chain of custody with these recordings is oftentimes longer than I’d like, but I’m confident it hasn’t gone any further than BAA and us here at Airchexx.