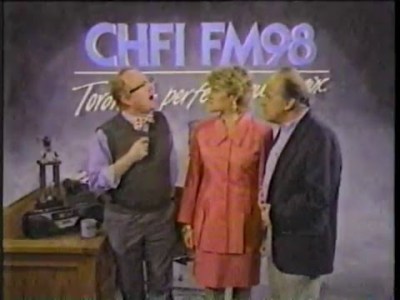 This is a decent quality recording, albeit in monaural. The first three-quarters or so is the Don Daynard and Erin Davis morning show. Paul Cook does news from the AM 680 (CFTR) NewsRoom. Russ Holden reports CanTel Traffic. You’ll notice that they don’t play much music at all on this morning show. This is a busy program with contests, show elements, frequent traffic and full news reports. In fact, while this is telescoped, it runs for over 37 minutes and includes all the commercial breaks, traffic and two full news & sports reports.

Noteworthy on this date, Game 6 of the National League Baseball playoffs is playing that particular evening between the Atlanta Braves and St. Louis Cardinals. The Braves won that game 3-1 and went on to take the NL Pennant in Game 7, setting them up to take on the New York Yankees in the World Series. This was mentioned during the CHFI Sports segment.


The final portion of this aircheck features Mike Marshall‘s show. CHFI billed itself as Toronto’s ‘At Work’ radio station, and was simply branded during this time as “Toronto’s Perfect Music Mix“.

Both Don Daynard and Erin Davis have since retired.  Davis hosts her own blog, which you can visit at THIS LINK.  View Erin Davis’ Twitter account HERE.