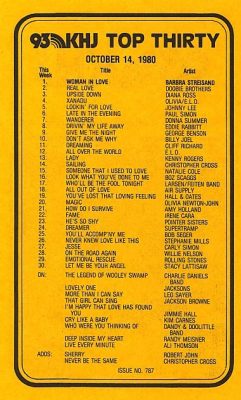 It was more than a radio station… It was a big part of Southern California in the 1960s & 70s. 93 KHJ “Boss Radio” became a hit music station in May 1965. For about three years its competition was its neighbor on the dial, long-time hit station KFWB “Channel 98”. In March, 1968, KFWB threw in the towel and switched to an all-news format. Boss Radio was king. The station’s roster of DJs read like an all-star list, with the likes of such talent as Robert W. Morgan, Charlie Tuna, The Real Don Steele, Johnny Williams, Machine Gun Kelly, Bobby Tripp, Mark Elliott, Bill Wade, Bobby Ocean, Humble Harve, Jerry Butler and others. KHJ continued to crank out the hits in the 1970s, but the rise of FM was having an impact on the station. By the end of the 1970s the once mighty KHJ was a shadow of its former self. At 9 PM on November 7, 1980, the end finally came, as KHJ switched over to a country music format. This aircheck is a composite aircheck from this final weeks of 93KHJ, featuring Al Conners, Scott Jefferies, Terry Moreno, Pat Garrett, & Danny Martinez.