With ratings continuing to slowly fall, aging demos and a business core becoming more unwilling to advertize to persons over 55, Entercom pulled the plug on its AM Standard’s outlet WJCE. The call letters were originally chosen to compliment an Urban AC format called “The Juice” some years earlier and were not changed when that format expired after the emergence of crosstown FM Urban AC 103.5 WRBO.

So, with little fanfare and virtually NO imaging or announcements whatsoever, the music was pulled in the middle of a song and the CNN News feed simply clicked in, followed by the Al Franken show on the Air America Network.

One of the most haphazard format changes heard in ages. We present it to you as a scoped 10+ minute audio time capsule, to serve as a place holder for the next format change that will inevitably happen to this noisy unkempt AM signal which was once home to Rick Dees, Terrence McKeever, Roy Mack and others in it’s heyday of the 60s and 70s as Plough Broadcasting’s WMPS.

And, to confuse you further, Locally owned and operated WMPS now occupies AM 1210, after having been moved by Flinn Broadcasting from 96.1 to 107.5 and then to internet only, only to resurrect them on the aforementioned AM 1210 in 2005.

Lost, are you? This audio clip should explain it all. 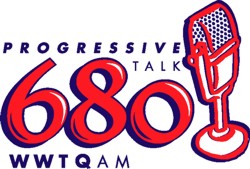