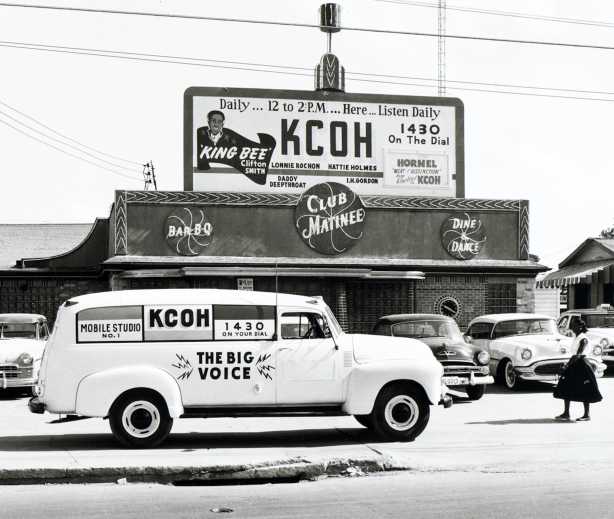 1430 KCOH Houston, proudly described itself as Texas’s first black radio station. It was the first black owned radio station in Texas, third in the nation. The station has been broadcasting it’s Soul, Gospel, Talk, Zydeco, & Blues format since 1953. The station’s “Looking Glass” studio has provided an opportunity for the station’s on-air personalities to directly connect with their audience. Locals recall how in the 60’s & 70’s, it was not unusual to walk past the offices at the corner of Almeda and Wichita, and maybe see Muhammad Ali, Ray Charles, George Foreman, or Ike and Tina Turner being interviewed. It was a beloved station for any years, but as the FM migration in the 1970s kicked in, number began to drop. Over time the station tried R&B oldies, & community talk, but the numbers never quite recovered. After over 50 years of broadcasting the Urban format, KCOH was sold to a religious broadcaster in 2013. It looked like the longtime voice of the Black community was going to be silenced forever, butKCOH has struck a deal to move programming down the dial to 1230, where it remains today.

This aircheck features longtime KCOH, Gladys “Gee Gee” Hill. Hill was one of a handful of female DJs to make a mark in the history of classic R&B radio (Philly’s Mary Mason, Detroit’s Martha Jean “The Queen” and Chicago’s Merry Dee and Yvonne Daniels come to mind.) In addition to being on the radio, Hill was also a recording artist. Pre-1980 R&B airchecks are hard to come by, and recordings of female jocks are darn near impossible to find, so enjoy a slice of Soul radio from 1970!