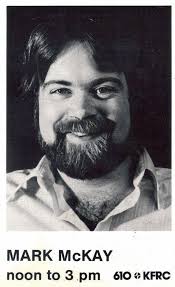 The legacy of 610 KFRC was always one of high-energy jocks, lightning-fast presentation and, of course, the hits! In 1982, while many AM music stations were changing to talk or nostalgia formats, KFRC was at the top of it’s game, smack in the middle of the second half of it’s Top 40 glory years!

This may be the tightest CHR format you’ll ever hear! Up first in this nearly 30 minute video composite is Harry Nelson. Nelson was entertaining and had his own personality on KFRC. He sounded much the same in Boston at WRKO and WJBQ Portland following that. After Harry Nelson, Mark McKay comes in for most of the rest of this aircheck. McKay had been with KFRC before this aircheck, using the name Marvelous Mark. McKay doesn’t disappoint! He had a quick wit (lightning fast!) and always “hit the post”, every break! Last but certainly not least is the man known today as “Broadway” Bill Lee. Lee is one of the last remaining personality jocks still doing live music radio – at WCBS-FM New York, these days!

The trio sound so good on this composite, it’s a shame if visitors don’t take a half hour out of their day to listen to all of this!

Tightly scoped for copyright reasons, and, unfortunately, the master tape arrived partially scoped already with part of each newscast removed and most of the commercials. We like to leave those in for historical purposes.

**CLICK THE VIDEO BELOW TO WATCH/LISTEN TO THIS AIRCHECK**