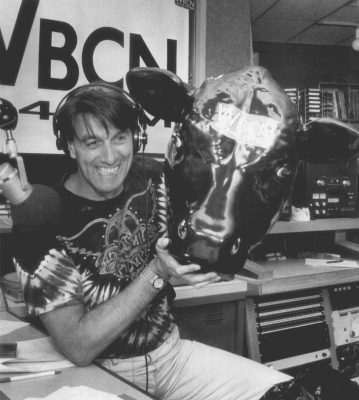 Perhaps there are few people outside of Boston who know who Mark Parenteau was. The former WBCN personality died in June, 2016 after complications from surgery for a long battle with Spinal Stenosis. For those who remember Boston’s legendary Rock station, WBCN, Parenteau was a familiar name. He began is long career at the station in 1978 and interviewed all the major Rock bands over the years, from J. Geils to Aerosmith. Boston politicians would get their turn being grilled by Parenteau. Comedians, too!

Parenteau’s radio career ended after a sex crime conviction. The story is out there, if you want to search for it. If you wish to just remember this man’s radio work and the talent that kept him at the forefront of Boston’s Rock scene for many decades, read on and listen to the audio.

The contributor of this aircheck has sent in half a dozen recordings of WBCN which I’ll get posted fairly soon. The country is shut down as I write this, so I’ve got plenty of time to make it happen.

Mark Parenteau played a comedy bit every afternoon during his show. For this particular show, Lenny Clarke comes into the WBCN studio for a bit of live comedy, spurred on by Parenteau. Clarke was from the suburban city of Cambridge, Mass. According to Mark Parenteau, Clarke even ran for mayor of Cambridge!

The audio quality on this is outstanding. For a 30+ year old tape, this held up well. There’s no music here, so we don’t know if this was recorded in mono or stereo and it really doesn’t matter. WBCN was processed very well, the microphone was well balanced, if not a bit heavy on the lower frequency response. Of course, in my humble opinion, FM radio was processed better back in the days before “HD Radio” and Neilsen’s “Portable People Meter” audio generator. Your opinion may vary.

Max Power is one of our regular contributors. He has submitted over a dozen airchecks from the Boston area, only a few so far have been posted. Most of those still awaiting processing are of WBCN. We’ll get to those as time permits.