Here’s another skimmer tape of Mike Hotaling on Albany’s Alternative 103.5 The Edge. Hotaling is live at the studio and Kelly McNamara is at a live remote after having more than a few drinks. Mike wrote when sending this in,

“…note as the phone breaks went on how much fun I was having getting clearly drunk staffers at the remote wound up… live radio was the best!”

I think most radio people, if they were in the business long enough, had similar events go on. That rarely happens now. 🙂 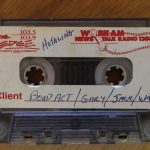 Contributor Mike Hotaling sent in this great 'check of himself on the now-defunct 103.5/103.9 "The Edge" Alternative simulcast. ...