Frankly, when this posted, your webmaster falsely assumed this was a big KNUS promo. Alas, the person who says he created this piece contacted us to set the record straight. Apparently this was *NOT* used on the air. Here’s what creator Bob Buchanan says about it:

the roundup was NOT an on-air promo. it was something i created and voiced in an after hours production session. it was in response to the rats that had died in the mclenden theater/studios over the weekend when exterminators put out poison.

We stand corrected. But… GREAT PIECE! 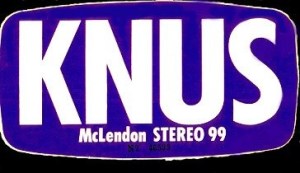