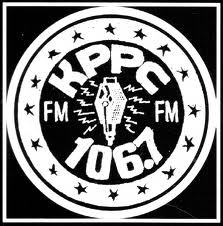 In researching this scratchy old tape that was obviously recorded from a pressed RECORD made from a recording of KPPC on 6/3/66, I discovered the rich history of 106.7 goes back to 1962 when the Pasadena Presbyterian Church (from which the call letters were derived) first launched this FM station to augment their service on AM. The storied history of this last-of-its kind AM time-share is documented in various places on the web, so I won’t re-write it here.

By 1966, the church still owned KPPC, and the station wasn’t sold to Crosby-Avery Broadcasting until 1968, so while it seems unlikely that this conservative church would air Progressive Rock, either one of two things happened: A. The date on this tape is dead wrong, or B. Freeform Progressive Rock was being broadcast, at least part of the time as early as June of ’66. Perhaps someone in the know (Calradiopd, where are ya?) can answer this.

The facts about this aircheck are this: There are audio features on this tape that give away the fact that this was from a pressed record made of KPPC’s broadcast, most notably, the clicks and pops noted during the announcer’s banter that sound like an old record. Now, even in 1966, it would seem strange that someone press a record of a station recording, at a time when Reel to Reel recording equipment was commonplace. Still, thats what we hear. Also, I don’t know what most of the KPPC jocks sounded like, except for Charles Laquidera, who was a part of the airstaff sometime between 1968 and 1971, since I remember him from WBCN Boston. So, I have no idea who this jock is since he does not say his name.

KPPC, at 106.7, would eventually sold to the National Science Network, then, 1973, it went to Burbank Broadcasting and became what we know today as the legendary KROQ. The AM station owned by the Pasadena Presbyterian Church would be separated from the FM after the progression of sales, and would continue broadcasting church services until 1996, when the station finally fell silent and the license deleted by the FCC.

It seems we’ve found an historic gem here, even though I had to scope it down from 30 minutes of long Rolling Stones and Muddy Waters tunes down to this just over 3 minutes of announcer and promo material. ASCAP & BMI rules, you know…