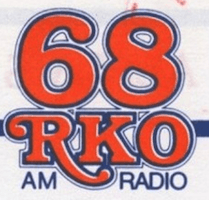 Thank you all for your nice comments. It was a great thrill to work at both WRKO and WNNNNBC. I never worked at WCAO. That IS a different JD. I also worked at WYND..WSRF… WSHE..WMYQ..WOKY..WHTT..WMRQ..WFLC..and WKIS. Thank you all again,
Johnny Dark (now in Florida)

With the benefit of time passing between the original posting of this aircheck and now, a few things can be said. First, the date can be narrowed down to 1975, not 1976. A few people have commented about this recording to help make that determination. Johnny Dark himself found this aircheck while online from his home in Florida. His comments are posted below.

As with most things in the media world, things eventually come to an end. One of the websites I used to go to for WRKO Top 40 format information was WRKO.org. Owner Shel Swartz shut the site down in 2017, noting his retirement and declining resources. I find that quite unfortunate, noting that wrko.org was one of the very first websites that I found on the web way back in 1997. The domain name is for sale, contact [email protected] “if you have a substantial offer and wish to make payment”.

Also going away rather soon (as of this writing), our competitor, reelradio.com. Citing health, declining revenue and ‘theft’, Curator Richard Irwin is closing the doors on the 22 year old legend as soon as operating funds are exhausted. A genuinely wonderful resource for the history of Top 40 radio broadcasting will be no more by the time Summer 2018 hits. We can only say goodbye, and get well soon.

Johnny Dark was one of the Top 40 jocks at The NEW WNNNNNNNNBC in the late 70s and is probably best known in this role, but before New York City called, Dark was heard in Boston at 68 WRKO when it was a very hot Top 40 station. Sounding VERY contemporary, RKO has the same 1976 jingle package (TM, I believe) as sister KHJ in Los Angeles. Just ONE shotgun jingle but quite rhythmic, used a couple of times an hour. The TOH here is a spoken produced work instead of the Johnny Mann Top Hour Jingle – touting the station’s role as New England’s number ONE Hit Music Station!

This station really cooks! RKO was probably in it’s best phase (even though purists still look at the period 1967-1970 as it’s best). It really sounds hot. Johnny Dark is in great form here, and while there’s not much more than 3 minutes of audio to sample, you’ll hear him hit the post each time!

Thanks to contributor Steve Bleecker.