We really don’t have much information on this particular aircheck or radio station other than it was owned by legendary Country music singer Buck Owens from 1967 to 1998.

Don’t ask where we get some of these obscure airchecks, some of these are from stations that aren’t around anymore and weren’t memorable enough even for basic mentions on the web. We had to do some digging to figure out that this station apparently WAS airing the syndicated Real Country format in 1996 under the call letters KCWW. On air, it was simply referred to as KCW. Wikipedia apparently has the call letter timeline wrong, listing 1580 as KNIX during this period (Listeners feel free to post corrections in the comment section)

1580 in Tempe was part of Walt Disney, Inc., airing it’s syndicated “Radio Disney” format since 1998 under the call letters KMIK.  In 2015, the station downgraded it’s transmitter plant and went silent for a short period of time, before returning as a Sports station using the call letters KQFN. 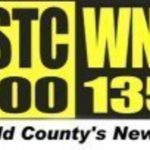 It's the end of the line for the WSTC / WNLK dual-cast as Cox unloads the two stations to Sacred ...