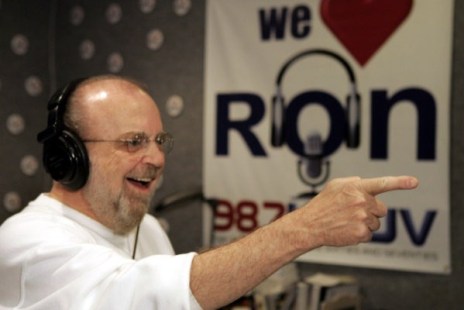 Forty-five years in one market. Thirty-two of them at the same station. He was No. 1 & he killed the competition. Ron Chapman was the king of Dallas morning radio. And his listeners loved him. They loved him so much, that in 1988, Chapman asked his KVIL listeners to send in $20 each, without ever saying why, and took in $240,000. (The money was later distributed to local charities. In 1959, as “Irving Harrigan” he joined the staff KLIF Dallas, where he teamed up with Jack Woods (a.k.a. Charlie Brown), playing records and providing character voices on the popular Charlie and Harrigan Show. In 1969, Chapman joined the staff of KVIL-FM Dallas-Fort Worth as morning disc jockey, music director, and program director, bringing the “adult contemporary” format to FM radio. During his 31 years at KVIL, Chapman became famous for his upbeat humor and his participation in outrageous stunts and giveaways. At one point, Chapman broadcast live while skydiving from a plane. In 2000, Chapman moved to KLUV Dallas, to play Oldies.  He stayed there until 2005, when he announced his retirement from radio. This aircheck features Ron on KLUV, 2 years before his retirement.