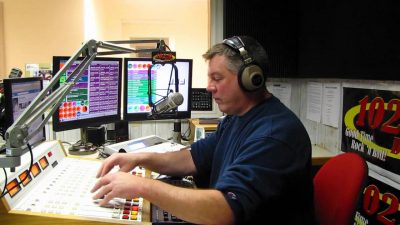 As posted here on Airchexx, WDRC-FM’s “All Request Saturday Night” had a long run.  From its humble beginnings during the station’s Top 40 incarnation in 1984, through the mainly 50’s and 60’s format to the Classic Hits incarnation in the days just before the format change in 2014, Ron Sedaille is well known in Connecticut and did a show that’s quite reminiscent of 1960s radio. He even has his own jingles!

The WDRC tribute site WDRCOBG.com says this about Ron Sedaille:

A native of Bangor, Maine, Ron moved to Connecticut at the age of 1. He was hired by Frank Holler to do weekends and fill-in shifts, (and) after Frank’s departure he took over “Jukebox Saturday Night” and transformed it into “All Request Saturday Night,” an all-request oldies show on WDRC FM (e-mail). In March 2013, WDRC FM dropped the syndicated Tom Kent show and Ron took over Monday through Friday nights from 7:00PM-midnight; most evenings he was voicetracked. It’s fair to say there wasn’t an airshift that Ron didn’t fill at one point or another. Ron was let go along with the rest of the FM airstaff when Connoisseur Media took over from Buckley Broadcasting on July 7, 2014.


Your webmaster recorded this one Saturday evening in North Central Massachusetts (about 8 miles from the New Hampshire state line), using a 7 element FM DX antenna from Radio Shack. The signal has a bit of white nose on it but otherwise this is really great!