…One boy, one girl and an assortment of farm animals!

Looking back, this is from an era where consultants began telling Country stations to back off the deejay patter and use more liners and drops. Music intensive was the name of the game, and the number of slow ballads in Country music was increasing as the mantra was to keep Country stations ‘female friendly’. PD Dave Collins tried, but was unable to capitalize on that advice as KOUL staffer Big Frank Edwards left for crosstown Country KRYS “K99”, then programmed them, surpassing the traditional market leader KOUL. Cool 103.7 never really recovered in the ratings.

Featured is your humble webmaster. I did weekends and holidays, and during the rest of the time I was on Active Duty in the U.S. Navy (stationed on the USS Champion, MCM-4 in Ingleside, TX). It was tons of fun. A shipmate of mine, Todd Winkler (former QM1) was also a jock on KOUL. He used the name “The Admiral”. 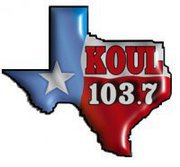