Advertisement
Follow us on Social Media
twitterfacebookyoutube
I couldn’t resist going back over 11 years ago to a Saturday morning show I had on Kix 106. Admittedly, this isn’t the best I ever sounded there at Kix, and I attribute that to a couple of things. Mainly, the station’s processing was a bit strange and it always threw me off. Instead of the studio mic being processed to make one sound like he or she pops out of the radio, it sounded more as if the mics were all attenuated in some way. This is why, as you listen, phone calls walked all over the studio mic. At the time, we tried pushing the mic volume up higher and pulling the Shortcut 360 (the device we recorded phone calls on) volume down, but that did little good. Mic volume was maxed out on that board and sounded a bit distorted, at least in my headphones.

The good stuff… Lots of promos for the former morning show of (Jay) Young and (Brian) Elder & Capt. Pat Adams; a wide variety of Country music… the format there was really wide, with at least one (perhaps two, I don’t remember) “classic country” songs an hour and lots of recurrents and 90s gold. Kix 106 could afford to do that. After the demise four years prior of the only Country competition (94.1 WOGY Germantown), WGKX could certainly afford to have a broad Country appeal… especially with Nashville just two hours drive down I-40. And just LISTEN to how many more ballads and slow songs were being played back then compared to the almost Classic Rock sound of Country today! Lots of Toby Keith and Keith Urban on the air in 2004, and Shania Twain was getting airplay then, although not for long.

I never said it on the air, but this day it was my birthday. But I was doing what I loved most, and my son Josh was with me that day, so life was certainly REAL good! 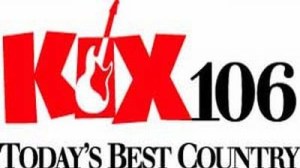 Come visit my store on CafePress!