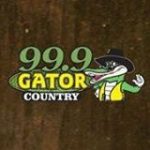 As happens a lot in today’s consolidated radio world, WFKS “Kiss-FM” has moved around a bit, and now sits on 97.9 FM. 99.9 is a Country music station these days and goes by the name Gator Country – WGNE-FM. But what happened to this radio station is a mystery. The FCC database says 99.9 changed it’s call letters to WGNE-FM on 7/3/2000.

Here’s another aircheck where at no time in this 45 minute recording (scoped down to about 8 1/2 minutes) does the jock say his name. But he reads the liner cards pretty well. As they say, any job in radio post Telcom 96 is a good job. In 2000, the station was live, at least for much of the broadcast day as far as we can tell. “Kiss-FM” here was NOT a kids station. This was Adult CHR, and this “Stuck In The 80s Weekend” was likely aimed at all the soccer moms in WFKS’ market. It’s also a Win It Before You Can Buy It weekend (we all did those in the last 15 years!)!

This was recorded between 4:40 and 5:25 pm. Yes, the tape was recorded a bit hot, and so because the source recording was a bit distorted from high input volume, there’s not much I can do with the recording to clean it up.