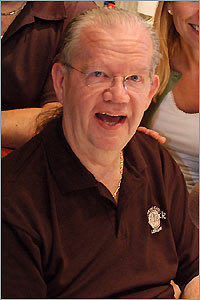 Dorman is one of those jocks who made it big in the RKO chain of stations back when personality really mattered. Once the Morning Show host at WRKO in it’s top 40 heyday, Dorman also spent time doing West Coast top 40 at KFRC San Francisco in the late 60s, and after WRKO was the morning guy at Fairbanks’ WVBF in it’s “F-105” incarnation.

Over 9 minutes scoped from the original 30, here’s Uncle Dave, STILL doing top 40 and sounding like he’s relevant and loves the music despite being generations older than his main audience. And perhaps the point of this is that great talent still commands an audience regardless of his or her age, and that just because a certain approach appears outdated, that doesn’t mean it doesn’t still work. For radio management, there’s an obvious lesson in this. And you know what it is 🙂