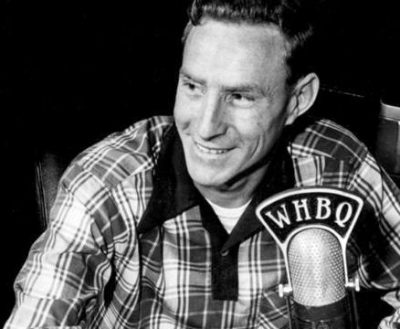 When did the Rock & Roll genre begin and where? It’s possible it all started right here, in a tiny little studio in Memphis, Tennessee. Much has been written about Dewey Phillips and his “Red, Hot & Blue” Rock & Roll show on WHBQ. This is the place where the first Elvis records were played. Phillips had a deep southern drawl and related so much to black audiences that he was commonly mistaken as being a black man. He was caucasian but that hardly mattered. Phillips was playing the music that Black America was listening to and it resonated up and down the Mississippi river, thanks in no small part to the big, 50,000-watt signal emanating from WHBQ‘s transmitter.

According to an article on Wikipedia,

“Phillips started his radio career in 1949 on WHBQ/560 in Memphis with a special studio at the Gayoso Hotel. In 1953 WHBQ moved to the mezzanine floor of the Chisca Hotel. Dewey Phillips was the city’s leading radio personality for nine years and was the first to simulcast his “Red, Hot & Blue” show on radio and television. During the 1950s he had 100,000 listeners to his 9pm-midnight slot and he received 3,000 letters a week.”

Dewey Phillips was bringing Black Music to segregated Memphis before Alan Freed did the same as Moon Dog in Cleveland. Phillips briefly hosted an afternoon program on WHBQ-TV/13 in the mid-1950s, before Dick Clark took over Philadelphia Bandstand then American Bandstand on WFIL-TV. It mostly consisted of Phillips playing records while he and others clowned around in front of the camera.”

If you ever wanted to know what Dewey Phillips REALLY sounded like, this 5-minute clip from November or December of 1952 (I can’t determine the exact date), is the aircheck to hear.

This was digitized by the contributor, so I can’t tell you anything about the tape itself. However, a couple of points are worth mentioning. This recording was made using a stereo tape deck. Not needed since it’s a mono aircheck but significant in that the left track was recorded at slightly too high a volume and there was some distortion. The right side was recorded with peaks nearly at 0db. To fix this, I erased the left track, then copied the right track to the left and mastered the whole aircheck to peaks at about -5db. While there is still a bit of distortion, it’s not bad. The overall quality is pretty good. It could use a bit of treble response, but since that might introduce white noise into this recording, I left it alone.

The last thing to mention is, you can hear, in a couple of spots, some record scratches. The original recording was most likely done using a record cutting machine. A special tonearm would be placed on a blank record with special lacquer and it would cut the record grooves in real-time during the acutal performance. This is most likely how this recording was made, as many radio stations in the 1940s & 1950s had such devices before the widespread use of magnetic tape.


Click below to hear this aircheck UNSCOPED (Airchexx Premium)