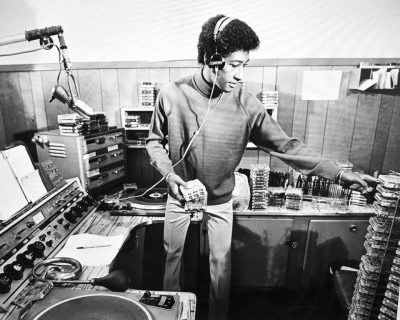 Frankie Crocker, “The Chief Rocker,” began his radio career at WUFO Buffalo, while studying pre-law at the University of Buffalo. His smooth, on air style soon had New York City calling. Frankie took a job at New York’s R&B station, 1600 WWRL. After a few years, WMCA came calling, and Crocker did evenings there until 1970, when the station flipped to talk. It was Frankie’s next gig that would make him a radio legend. As program director at 107.5 WBLS and 1190 WLIB in the early 1970s, Crocker began to shape an innovative and influential radio format. That style would become known as progressive R&B, which later evolved into what Frankie called “Urban Contemporary.” With this new slicker version of R&B, WBLS perched itself at the top spot in the ratings. This new kind of R&B station was beginning to spring up on the FM dial around the country. Their formats emphasized less talk, a cross blend of jazz, pop/rock, sophisticated soul, funk, and R&B. The Venus Flytrap characters on the television sitcom WKRP in Cincinnati showed a slight resemblance to Crocker’s sound and style. Frankie Crocker’s popularity helped him to cross over to TV. He was one of the first V.J.’s on VH-1, the video cable channel, along with Don Imus, Scott Shannon, & singer Rita Coolidge. He also played host of the TV show ”Solid Gold,” and was host of NBC’s Friday Night Videos. His skills led to him program KUTE, Los Angeles, WGCI and WNUA, Chicago, and WKKS, St. Louis, and finally at WRKS 98.7 Kiss, New York. He was inducted into the Rock and Roll Hall of Fame as a DJ/programmer. This rare aircheck features Frankie from his early days at WBLS.