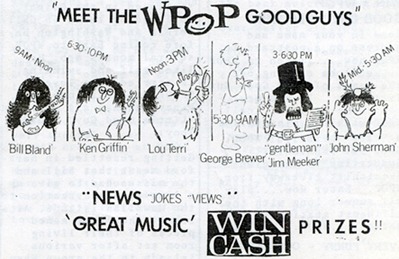 Ken Griffin was a star in Hartford back in the beginnings of Top 40 AM radio. The contributor for this aircheck, John Saville, who worked with Griffin at WWYZ, says Griffin was ‘the nicest man you’d ever meet’.

And there’s the reason we have this aircheck. In the years before “YZ flipped to its now long-standing Country format, the station was a ‘Soft AC’ in the truest sense. Although, the station struggled with it’s identity – slogans ran the mill from “Natural 92” to “YZ-92” and never really settled on any one slogan in the 1980s. It did have a strong competitor. 104.1 WIOF, which was also a Soft AC station. The playlists were more or less identical, except WWYZ tended to play more Oldies.

Not having much to go on, we present this aircheck without much in the way of comment aside from noting how unconventional Ken Griffin’s show sounds. He makes fun of being called “Howard Stern light”.

What will you hear: Without giving it away, the highlights include calling WYSP Philadelphia trying to contact Joey Reynolds – now, for those not aware, Joey Reynolds worked with Ken Griffin when they were both at WPOP. At this point in time, Reynolds is heard in Philadelphia and was about to go to WNBC New York (Stern was about to be fired from WNBC…). So, it’s kind of an inside event. Griffin takes a few phone calls after his engineer tells him he has to connect the audio in another room before airing it. I’ve been told that WWYZ was at least partially automated until its Country format launched in 1988. Someone can verify this. For the rest of the aircheck, you’ll just have to listen!

This came on CD as was digitized by our Contributor from his many aircheck tapes. The audio is clean and crisp, although it is in mono. This most likely came from the studio skimmer machine. I performed some light processing and tightened up the already-scoped audio for presentation on YouTube.

John Saville is a long time broadcaster.  Most of his work has been in Connecticut.  Included in his portfolio of radio stations are WWYZ Country 925, WHCN 105.9 The River, WKSS Kiss 95.7, 991 WPLR, WKCI KC-101, WAVZ 13 Waves, 102.9 WDRC-FM, 960 WELI, 1220 WSCR, WMOS “The Wolf” at Mohegan Sun Casino, WNHU Public Radio and even in NYC at what was 107.1 WYNY “Y107” Country. He is a much sought after personality, the founder of one of Connecticut’s premiere mobile DJ businesses. Visit John Saville Entertainment for more information.  His specialty is weddings. He has decades in that business and if you’d like to hire a killer jock for your nuptials, go to //johnsavilleentertainment.com/