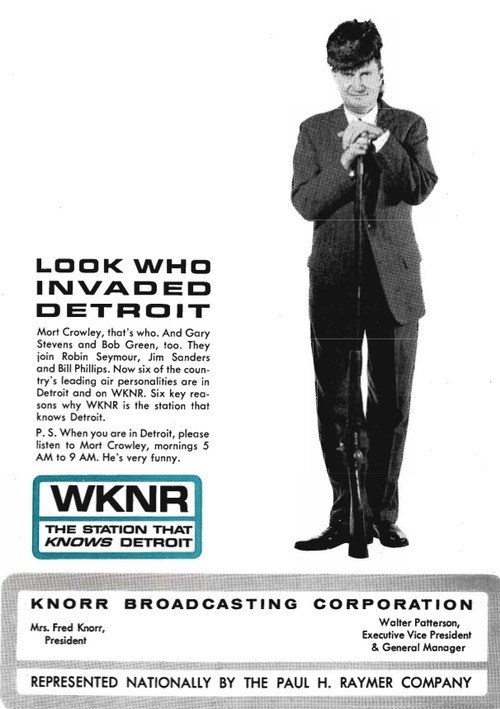 During these strange times we’re all going through, sometimes one tends to seek for things to do beyond the average day to do. Cleaning up old files etc. is one of them. I’d noticed an absence of airchecks on your site from WKNR (Keener 13) in Detroit during the 60s. Say what you will, the station was unique in so many ways, including Hooper and Pulse ratings with shares into the 30s.

WKNR Detroit was indeed a great, albeit early, contender in the 1960s Top 40 ratings arena. Many think of that powerhouse RKO-General outlet CKLW across the river in Windsor, Ontario as the big hit music station. And it was. Keener 13 came first though and as our contributor said, WKNR owned Detroit from 1964-1969.

This begins with a jock promo, with each jock adding his name to it. You’ll hear Dick Purtan, Ted Clark, Jerry Goodwin, Bob Green, Scott Reegan, Jim Jeffries, Paul Cannon (who later went on to much bigger things) and… Rodney the wonder rodent?! Someone get a trap!

This sounds like it came from the original production reel. Its 30 minutes of promos and other things from WKNR all spliced together. Virtually zero noise on any of this. One technical note, I had to kill the left track because it was somewhat muffled. Being that in 1964 or so when this was put together it was in mono, it was easy to just wipe out the left track and just duplicate the left, which was very good quality. Fidelity is great!

Enjoy this slice of 1960s WKNR. As our new Contributor says… there’s not a lot of WKNR on our site. Not for long! New WKNR airchecks will post soon!