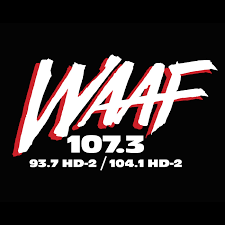 For such a short aircheck, there’s so much information available. I’ll try to sum this up as briefly as possible.

For the purposes of this description, we’ll begin in 1970 when WAAF switched from Beautiful Music to Album Rock. The single most critical aspect of WAAF was it’s transmitter location, rather than the many highly talented individuals who were known in the greater Boston radio market. WAAF is the direct decendent of the original W1XOJ FM radio station, as FM was first being tested as a new broadcast band. But that story you can read online at a number of locations. Airchexx Contributor Scott Fybush could tell us much more than I could research in one day.

Please take a moment and consider a donation to help defray our operating costs. Thank you.

This recording was made by our Contributor and Content Editor Ellis B. Feaster. The recording itself is in good condition, but suffers from ‘white noise’ and was probably recorded some distance from WAAF. This is likely from the morning show. By 1988, WAAF was identifying itself as a Boston radio station. By doing so, WAAF was trying to better position itself against the Boston Rock Stations WBCN and WZLX, and to a degree, WGIR-FM Manchester NH and WHJY Providence, all of whom had strong signals in eastern Massachusetts.

In 2006, in an attempt to better compete in the city of Boston, WAAF moved its transmitter from it’s longtime, big signal home in Paxton to what’s known as the “FM128 Tower” in Newton Massachusetts, off of Rte 9. That tower then (and now) also is home to cell phone service, television and 105.7 WROR (the former WVBF, WKLB, WCLB and WKOX-FM). In doing so, WAAF lost the enormous signal that could be heard from south of Boston, most of Connecticut, Rhode Island, Vermont, New Hampshire and parts of Maine. In your founder’s humble opinion, this was the single worst decision ever made by WAAF management. By losing the large signal coverage, WAAF had only it’s format and personalities going for it, in competition with long established downtown Boston radio stations. In essence, it became just another signal and lost its signal advantage.


As of this writing, WAAF has been sold to Educational Media Foundation and is scheduled to change formats to EMF’s Contemporary Christian format, branded as K-Love. 2020 marks 50 years in the Rock format. At four minutes and nine seconds, we salute the last of a special breed of stations. A link to the early 1970s. All the stations in Boston which used to air an AOR format are now long gone. Stations such as WBCN, WCOZ and others. WAAF was the last link to that era. WZLX came along in the mid 1980s, and for a long time it was a “Classic Hits” station. Big time difference in the formatics.

Watch the original WAAF video which includes short clips of WZLX and WBCN below.