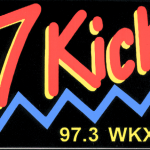 Cadillac Jack is all excited about the New Sound of Kicks-FM, and judging from the amount of reverb (which my wife says gave her a headache), station management is, too!

Here’s a scope of the Kicks Morning Show with Cadillac Jack and Ginger Gregory, apparently without Traffic reports this particular morning ‘because the receiver is down’. A few small technical glitches mar an otherwise fun segment for the morning crew, trying to give away a $100 dollar bill to some lucky listener.

Listening to this, which could be on any CHR station today, you gotta remember that this was done just slightly before everything went to hard drive based audio delivery systems, so most likely the Kicks staff was working with several Denon CD cart machines, a Reel to Reel might still have been next to the board (could have been a minidisk recorder at this point) to record phone calls, and regular ITC tape cartdridges were probably still being used for commercials. With much of that stuff, carts tended to stick, CD players skip, and any number of small glitches could still occur as the era of live, local began to draw to a close. Remember that when Madonna doesn’t start right out of a Kicks-FM jingle and there’s two seconds of dead air…

There is a website out there called “The History of Smith Broadcasting” on which lists a lot of historical information on Chattanooga Radio. Found under the section for 1988 was this historical nugget about WKXJ:

September – A frequency is opened in South Pittsburg, Tennessee (near Chattanooga) and M.D. Smith and Robert “Cactus” Gay apply for it in the name of Smith Broadcasting. Later Cactus becomes the other partner. The Construction Permit (CP) was authorized in October 1989, but the change in Authorization to Marson Broadcasting (the new partnership) did not take place until April 23, 1990. Construction began immediately.

Summer – No buyer found for WNUE, which has been off the air since fall of 1989. Some equipment is used for the new radio station, WKXJ-FM, a Class C2 station being built in So. Pittsburg/Chattanooga, Tennessee on 97.3 MHz.

So, we know that Kicks-FM was on the air, starting sometime in 1990 or 91, and it’s original format was HotAC. the station apparently didn’t go in a CHR direction until sometime after 1994. Our Facebook friends who worked there will know more, and hopefully will post their comments below. 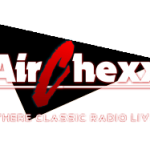