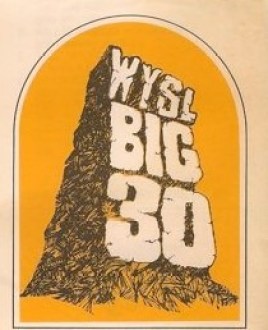 When it come to classic Top 40 radio out of Buffalo, NY, for many, one set of call letters come to mind… WKBW. But those who know Buffalo radio, know there was a second options for pop music. That station was 1400 WYSL. WYSL was touted as the “underdog” against WKBW, a station that had almost fifty times the signal strength. WYSL only needed to broadcast to Buffalo and the surrounding area of Western New York to succeed. Referred to as “Whistle,” and “The Rock of Buffalo,” the station played “Top 40 Hits” of the time for an audience that was looking for a different sound than the more mainstream WKBW. It also played the hits with a fresher approach and younger personalities.

Some of the jocks heard on WYSL include Dave Shaffer, Sean Grabowski, Michael Lee Scott, Bobby Bennett,  Roger Christian, George Hamberger, Michael O’Shea, Lee Clayton, Chuck Morgan, Jack Sheridan, Hal Martin, and the jock featured on this aircheck, Chris Clark (Paul Palo), who is holding down the WYSL all night show in 1968. After a 6 month active duty tour at Ft Leonard Wood, he returned as a newsman by the name of John Patrick at WYSL in 1969, before moving to California.