Found on an old tape we received back in 2004, here’s our first look at the legendary, if not forgotten 136 KRUX. While serving the Phoenix market, this relatively low-powered station owned the market with its 5,000 watt transmitter in Glendale all throughout the 60s and early 70s. The station remained a Top 40 giant until 1981 when it flipped to Big Band.

This is interesting for a couple of reasons. First, there’s a LIVE overnight guy… Jay Stone (surely not the guy from 99X New York?!). You judge his performance. We give kudos to the PD for using his overnight shift as a training ground :). Other jocks featured on this aircheck are Todd Wallace and Phil Davis.

KRUX at the time of this broadcast is formatted by (or perhaps I should say consulted by) Bill Drake. The Drake format is alive and well here, with that great Bill Drake legal ID…”And Now, Ladies and Gentlemen…!!”. Drake’s trademarked format is all over this station from the jingles down to the jock patter.

One more, very interesting feature, about four minutes into this ‘check, you’ll hear one Logan Stuart doing commentary on the day’s news. It’s here that we were able to pin down the date of this aircheck, since Logan mentions it at the end of his commentary. And listen for KRUX “Traffic Watch”. Wow! Never heard traffic done like that before!

This may be short, but I think you’ll enjoy listening to a Top 40 legend that is long gone but hopefully not forgotten by all. A Drake station, too! 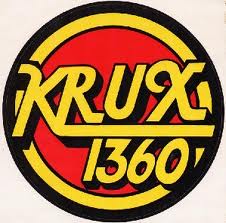