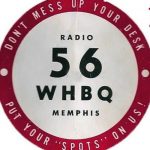 As the most popular radio disc jockey in Memphis in the late 1940s and the 1950s, Dewey Phillips was a radio trailblazer with his larger-than-life on-air persona that predated the later Rock and Roll DJs. From 1949 on WHBQ, Dewey didn’t just announce records, Philips was part of the show, singing along wit the records, and punctuating the music with commentary and jokes delivered in a rapid-fire manner that was half hillbilly and half jive-talking hipster. At a time when most Memphis stations played “black music” or “white music,” Philips, who referred to his listeners as “good people,” played whatever moved him, from Howlin’ Wolf to Frank SInatra, Hank Williams to Roy Brown. His show, which he called Red Hot & Blue, became very popular with the young people of Memphis.

Daddy-O Dewey was known as the first person to play Elvis Presley on the radio. Dewey who first played ‘That’s Alright Mama’ to his unsuspecting audience and in doing so changed the world forever.

His television show, Pop Shop, went on the air in 1957, an unsanitized version of American Bandstand, and for a time was the biggest thing on TV in Memphis.

In 1958 WHBQ changed to a Top 40 format and fired him, knowing Dewey wouldn’t be able to adjust to a regimented playlist. He continued at other stations, but medical problems caused him to become reliant on alcohol and pills and his life began a downward spiral. He died in 1968 at the age of 42. -Ellis

...this aircheck was likely from a few months before the station actually went Top 40. ...

Walt Jackson is a great jock!  What this recording exudes is pure FUN! ...