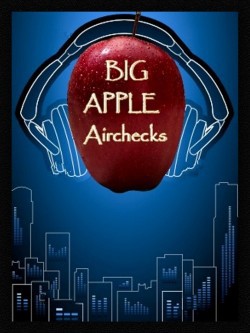 Somewhere below the cellar is Fred Winston’s voice. His on air charm and sense of humor are natural talents.

Its Ratings Day and Winston tells Newsman John Priester he brought all three of his listeners from the World’s Largest Stockpile, er, WLS- which he couldn’t mention on Majic 104. Not that THAT would stop anyone on the air today but in 1990 some things were still sacred.

Vicki is your personable traffic girl.

What’s notable on this aircheck? Lots. First off, WJMK in 1990 was still a REAL, honest-to-goodness OLDIES station. No ponderous 70s/80s “Classic Hits” songs – which means no disco, no hard rock, and apparently, after listening to this you’ll note, not one song newer than 1972, and plenty from prior to 1964… Actually, 1958 is represented by Elvis Presley. Speaking of coincidences, January 8 was The King’s birthday – just two days before this aircheck posted (and was recorded)!

What YOU, the listener doesn’t hear on this because I, your webmaster, edited out, were the SIX dead segues that occurred from about the middle of this aircheck (about 8:45 am in Fred Winston’s morning show).

There are all of TWO jingle cuts heard on this. Both sound like they were early 80s vintage (I liken those to the old “M-104” WFMP Fitchburg MA jingles we had in 1980 – this footnote just for my friends Thom Whetston and David Bickford).

This was recorded in mono, for some odd reason. Perhaps the radio was set to mono, older receivers had that option for stations that were distant, as Stereo mode could get a bit scratchy when reception wasn’t great. Also, there’s a hint of ‘wow & flutter’, a term used to describe tapes that didn’t quite align right on play heads. In this case, it was a cassette that when turned over to side two, was just a bit muffled for the first few minutes. You won’t notice the tape turning, but you’ll hear the audio quality shift in the middle of one of the edits.

Fred Winston is… himself. His speech is always deliberate. He is always a joy to listen to. You’ll enjoy this, almost 39 minutes of WJMK – “Majic 104′!

Another great aircheck donated by “Big Apple Airchecks“! Thank you!