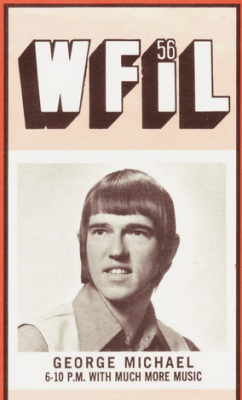 George Michael came from WFIL Philadelphia in 1974 to replace Cousin Bruce Morrow, who moved over to WNBC that year. George Michael was probably the most high-energy Top 40 personality that WABC ever had during its Top 40 years 1960-1979 or its Adult Contemporary era 1980-82.

Since George Michael had the so-called “teen” hours 7-10 pm, much of his show was centered around the high school listeners. On this particular recording, WABC is saluting Bay Ridge High School in Brooklyn. There were other recordings made of this particular night and most likely the entire evening was captured on tape, but this is the first time this particular segment has been posted anywhere. It’s an ORIGINAL recording made by contributor Bob Gilmore from Shelton, Connecticut.

Once again, I’ve had to remove the music from this, and yes… it’s VERY tightly ‘scoped down due to the ever-tightening requirements of the music industry to combat copyright infringement. Therefore, you’ll only hear the DJ and station elements, and the ‘songs’ are chopped out within one second of the vocals. Over the years, we’ve received numerous complaints about this practice, but this is how it must be in order for us to remain online and in compliance with the rules. Note: ASCAP, BMI and SoundExchange, the 3 entities which collect royalties for artists, seem to no longer recognize the long-standing ‘fair use’ clause of U.S. copyright law, which, loosely interpreted, translates to about 7 seconds of ‘incidental’ audio. Therefore we can no longer even include the standard two seconds of audio that we’ve traditionally left in just for effect. My apologies that it has to be this way.

The audio quality is ‘fair’. It begins just a bit muffled, as many of these do because of the age of the tape itself, but straightens itself out by mid-recording so that by the end of this, it sounds just as WABC would have on a decent table radio in 1977. The whole recording is missing some of the top end, but otherwise is quite enjoyable.