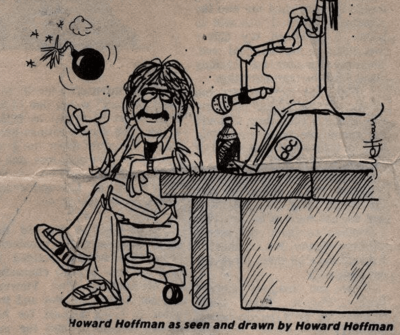 In late 1979, the winds of change were blowing through MusicRadio 77 WABC. People were spending more time listening to FM radio, and the once mighty WABC, was seeing it’s numbers drop. WABC management thought changes were needed save the station. One of the most painful parts of that transition was what has become known as the “Thanksgiving Massacre of 1979,” where Harry Harrison, Chuck Leonard, & George Michael were let go, in an effort to modernize the station. Dan Ingram was moved to mornings, and Howard Hoffman was brought in, from ABC’s KAUM in Houston, where he was hired by Rick Sklar, who was the head of programming for ABC Radio. Howard’s job was to up the personality, and listener interaction, on the evening show. To accommodate Howard’s phone-intensive act, WABC installed an extra mixing board and a telephone hybrid system, which was something the station never used previously. I personally listened several nights a week when I was a broadcasting student at Hofstra University, and it was a freewheelin’ high energy show, that was fun to hear. The show lasted until 1981, until Howard was replaced by the NY Yankees & Dr. Judith Kuriansky. Howard went on to work for some legendary radio stations, like KOPA, KMEL, KFRC, WQHT, KITS, and others. As of November 2019, Howard does production for 710 WOR New York. -Ellis