In the queue for a couple of years for posting is this couple of promos for John Records Landecker, who recently retired from WLS and radio, in general. According to Contributor Mark Shayler, these promos aired during the start of Landecker’s last stint doing nights on WLS-FM, beginning on January 23, 2012.

The promos were produced and parts narrated by former (and current) WLS DJ Jeff Davis, who was still the voice of WLS AM and FM at the time these aired. Davis hosts his own show on 94.7 WLS-FM. 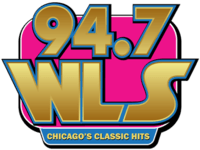