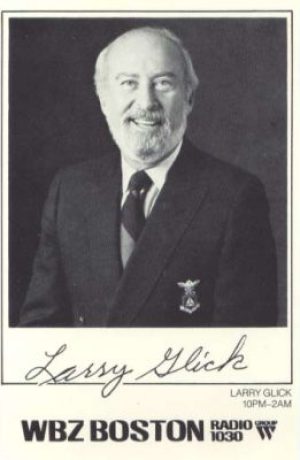 Larry Glick was a legendary talk show host on Boston radio stations from the 1960s, through the 1990s. He was on WMEX, & WRKO, but he is best known for being on WBZ from the late 60s, until the late 80s. With his long running show, he built a loyal following of fans, called “Glicknics,” who had nicknames, and would often suggest guests for Larry’s show, from interesting people they knew. Glick’s career at WBZ reached its high point in the 1970s, when he hosted the station’s overnight show, when the station’s powerful signal allowed Glick to be heard in close to 40 states and eastern Canada. No politics, or arguing. It was a fun show, with Larry playing comedy bits, humorous songs, and just having a good time joking with, and learning about his listeners. It was a unique show you probably would not hear on the radio today.