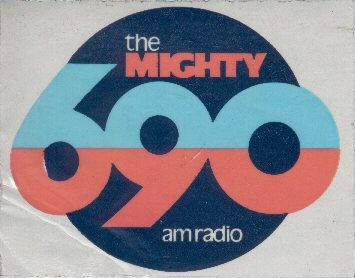 Courtesy of aircheckdownloads.com, here’s a ‘check that will warm the hearts of AM Top 40 listeners from Southern California. Admittedly, your webmaster has been all over the place ever since high school, and in 1984 I was in the U.S. Navy, attending Radioman “A” school in San Diego. This was one of the stations I listened to before they flipped to Oldies.


The Mighty 690 aimed its programming at Los Angeles – some 200 miles to the north, despite a transmitter in the badlands of Baja California south of the border in the Rosarito area. With 77,500 watts days (which, by virtue of it’s location on the AM dial gave it an effective 100,000 watts!) and 50KW at night, this station could be heard all over Southern California. Indeed, the Mighty 690 even had remote studios in Burbank, California. And just to make things interesting, XETRA was the first station in the market to broadcast in AM Stereo (of which your webmaster is a BIG proponent of). You’ll notice the stereo separation on this aircheck.

XETRA was considered one of those ‘Border Blaster’ stations, similar to XEROK 80, in Juarez, Mexico, a station about 20 miles south of the West Texas border at El Paso, albeit not quite as infamous. Although the station was owned by a Mexican company per Mexican law, it was run by an American company. Thus, an English language Top 40 format evolved by the 1980s, after a successful run as a “Beautiful Music” station through most of the 70s, and All-News before that in the 60s. There is more information available on the history of XETRA out there, and a good place to start might be this Fan Page on Facebook…

This features Michael Boss, and there’s a LOT of HIM on this scope – no shortage of personality at this station. Notice the top-of-the-hour Legal ID jingle… minus the actual ID. I actually remember it as a dual English/Spanish ID when I heard it in ’84 (the Spanish ID featured a young sounding woman almost whispering the ID in Spanish…. XETRA, Tijuana, Mexico). Anyway, the jingle was the same one used at 93/KHJ during it’s “Rhythm of Southern California” era in the late 70s.

If you heard “Extra” at all in its Top 40 or Oldies days (as “69 Extra Gold’), I think you’ll really enjoy this slice of AM Stereo magic!

This is Steve West. Most of you don’t know that I have no income at present and since the second of July, we have used all of our resources. My family and I are hoping that donations to airchexx will continue, to help us survive financially until my retirement income arrives sometime in August.
Please donate if you can. I provide Airchexx as a service to all of you for free, and will continue putting in the time to ensure this website remains a historical beacon for all time. Please use the donate button below. Thank you for your continued support!