KHJ at the end of 1978, was the poster child of liner card radio. Sure, the music is on target, but the jocks really had their hands tied and couldn’t really be themselves. The station’s slogan tells it all: 93/KHJ – The ALL MUSIC STATION. Not a terribly catchy phrase, to be sure. But this was KHJ, which had become a legend over the years. Perhaps RKO General’s management thought the station could rest on it’s laurels? At any rate, KHJ would attempt a revamp of it’s format in ’79 in an attempt to re-capture a vanishing audience. That format sounded great, but was short lived, as KHJ would go Country in November of 1980.

We have a resident expert of sorts, who comments from time to time, perhaps CalRadioPD can shed more light on the 1978-1980 time frame.

Mucho Morales starts off this 8-minute scope, and Bobby Ocean comes in about halfway through. Oh, that VOICE!!! I don’t care what mold they cast him in, Bobby Ocean always sounded wonderful! Still does, at every production he voices, and every station he images. Proof positive that great talent transcends all time periods. 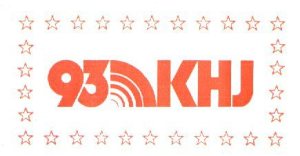