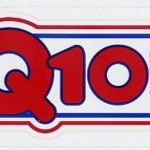 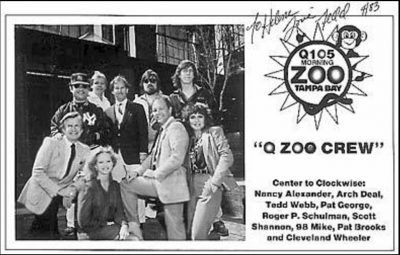 In 1981, when two radio vets came together, something magical happened! Scott Shannon & Cleveland Wheeler started a morning radio revolution, when they lauched The Q Morning Zoo, on Q105, WRBQ. The show became the watercooler talk of every office and construction site in Tampa Bay, blowing away all the competition.

The Q Morning Zoo was unlike anything to ever hit once sleepy Tampa Bay, or anywhere else at the time. The hosts were quick-witted, opinionated, and and made big money for the owners of the radio station. When Shannon left the show to launch Z100, in 1983, Cleveland’s new partner became former WLCY news man Terrence McKeever, and then Jack Harris. In late 1991, management elected not to renew Cleveland’s contract deal and he was replaced on the “Zoo” by Mike Elliott. For many years, the Q Morning Zoo was a major force in Tampa Bar morning radio, and it provided the template for many other morning shows around the country.

This 1988 aircheck features the Q-Zoo when they were still riding high in Tampa, before WFLZ, The Power Pig, arrived a year later, and started to quickly cause big changes to Q105. -Ellis