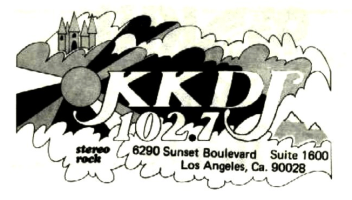 “KKDJ… With over Eight-Thousand minutes of music a week”

Before KIIS-FM, there was KKDJ. Beginning in 1971, KKDJ (which, according to sources, was indeed related to 97 WWDJ Hackensack, NJ) began an automated (we’d call it ‘live assist’ today) Top 40 format on 102.7 FM. It lasted until 1975, when the station merged with then KIIS AM 1150 and took the KIIS (FM) call letters and format identity). There are various write-ups about KKDJ available on the web and so I won’t attempt to write about a station that I don’t remember. One good place to start is KKDJ.net. The site seems to be full of much factual information, that is, if you can get by the glaring error of the mention of AM competitor KHJ being on 920 KC. Maybe someone will fix that now that I mention it. 🙂

You’ll hear a pretty unknown DJ, what sounds like ripped-off Johnny Mann Singers jingles, and the hits of the day. It’s still good listening. Hopefully, someone knows a lot more than I about this station and will post a comment or two.