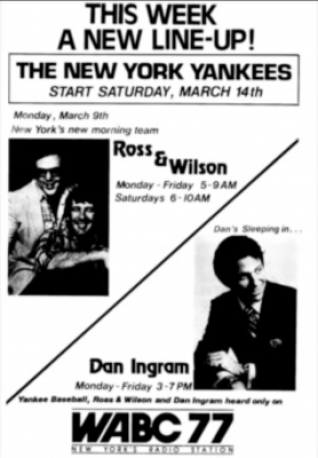 In 1981, you can feel the winds of change blowing at WABC. The music had moved from Top 40, to more of an Adult Contemporary direction. Information was becoming more important, and you could hear more talk on the station. One of the biggest changes at the station involved getting a new morning show that spent more time talking to listeners, rather than playing lots of music. In March of 1981, WABC brought in the morning team of Ross & Wilson from G-93 WZGC in Atlanta. Ross Brittain & Brian Wilson were different than anything we had ever heard on WABC. They spent most of their time talking about pop culture, news, & current events. This move allowed Dan Ingram, who had been doing mornings for just over a year, to go back to afternoons, where he had been for 18 years before he moved to wake up duty.

I recorded this from Philadelphia, so the audio is less than perfect, but you can still hear what Ross & Brian sounded like on their first day in New York.