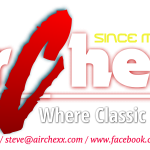 A relatively recent aircheck, here’s Scotty G., broadcasting ‘on location’ at “Redbone Alley”, presumably a dance club somewhere in the Florence SC area. The station calls itself “103X” and sounds very typical of many Rhythmic-leaning CHR stations to this day.

During the 80s, the station was known as WPDZ, ‘Z103’ until 1987, when the station went into bankruptcy. It originally had a fairly weak signal but had planned to raise power to 50KW – a plan that didn’t happen before bankruptcy.

In 1988 WJMX, which was then on 106.3, purchased WPDZ and moved the call letters to 103.3, and launched a CHR format. The format leaned Rhythmic and remained in place until July 2010, when the station flipped to HotAC.