Central Florida’a 540 WGTO once had one of the best AM signals in the country. The station, licensed to Cypress Gardens, a small town between Orlando & Tampa, once had a daytime power to 50,000 watts, calling itself “the most powerful station in the nation” due to operating at the lowest AM frequency permitted, with the maximum amount of power permitted. They keep that power until they moved the transmitter closer to Orlando, and they had to drop the power a bit 46kW, around 1980-ish. WGTO aired a Top 40 music format in the 60s & 70s, and Country and Religious formats through most of the 1980s.

In 1989, the station tried to revive itself by flipping to Oldies, as “Cruisin’ Oldies 54. However, the station could never get a foothold in the market with Oldies being played on FM on Cool 105.9, WOCL. The station limped along until 1994, when it was purchased by Paxon Communications. Paxon dropped the WGTO call, flipping to WWZN, and ditching the Oldies to Sports Talk, as “The Sports Zone 540.” This audio features a WGTO station profile tape, used for sales presentations for Advertisers & ad agencies, to give them a glimpse of what the new Oldies format sounded like. -Ellis 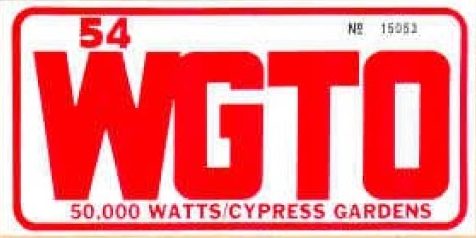